The text of this petition was written in English by the Europe Code Week Ambassadors gathered in Brussels on September 12, 2017, to raise awareness on the importance of algorithms. The petition can be signed here.

Translations are available in the following languages: [DA][EN][IT][RS][TR] 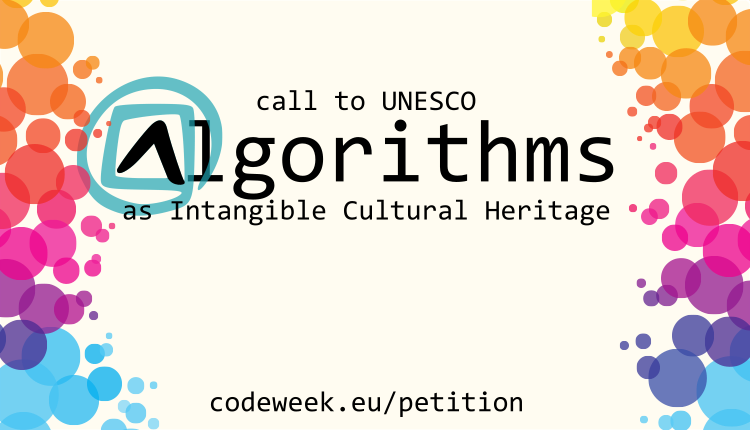 Algorithms are intangible achievements of the human intelligence that produce huge tangible impacts on our lives and pave the way to the future. Known algorithms provide a deep understanding of the computational aspects of the world, enable a conscious use of technology, and provide the basis for innovation.

An algorithm is an unambiguous, finite, executable procedure to solve a problem, to achieve a result, or to bring an idea to life.

In 1972 the United Nations Educational, Scientific and Cultural Organization (UNESCO) adopted a Convention concerning the Protection of the World Cultural and Natural Heritage, seeking to encourage the identification, protection and preservation of cultural and natural heritage around the world considered to be of outstanding value to humanity. According to UNESCO: “heritage is our legacy from the past, what we live with today, and what we pass on to future generations. What makes the concept of World Heritage exceptional is its universal application” (http://whc.unesco.org/en/about/, last accessed on Sept 12, 2017).

In 2003, UNESCO recognized that cultural heritage does not end at monuments and collections of objects and adopted a new Convention for the Safeguarding of the Intangible Cultural Heritage, defined in Article 2 as the “practices, representations, expressions, knowledge, skills – as well as the instruments, objects, artefacts and cultural spaces associated therewith – that communities, groups and, in some cases, individuals recognize as part of their cultural heritage” (https://ich.unesco.org/en/convention last accessed on Sept 12, 2017).

The second paragraphs of Article 2 of the Convention identifies, inter alia, 5 domains in which the intangible cultural heritage is manifested: (a) oral traditions and expressions, including language as a vehicle of the intangible cultural heritage; (b) performing arts; (c) social practices, rituals and festive events; (d) knowledge and practices concerning nature and the universe; (e) traditional craftsmanship.

The third paragraphs of Article 2 of the Convention defines “safeguarding” as “measures aimed at ensuring the viability of the intangible cultural heritage, including the identification, documentation, research, preservation, protection, promotion, enhancement, transmission, particularly through formal and non-formal education, as well as the revitalization of the various aspects of such heritage”. Safeguarding entails education, awareness-raising and capacity building at national level (Article 14), and maintaining representative lists at the international level (Article 16) “in order to ensure better visibility of the intangible cultural heritage and awareness of its significance.”

We, the undersigned, recognize that algorithms are among the highest achievements of humanity and that they are worth being regarded as part of our intangible cultural heritage.

We, the undersigned, believe that safeguarding algorithms means enhancing their visibility, raising awareness of their significance, increasing their circulation, and contributing to building a knowledge society.

We, the undersigned, call on UNESCO to add algorithms to the domains in which the intangible cultural heritage is manifested.

Your experience on this site will be improved by allowing cookies.